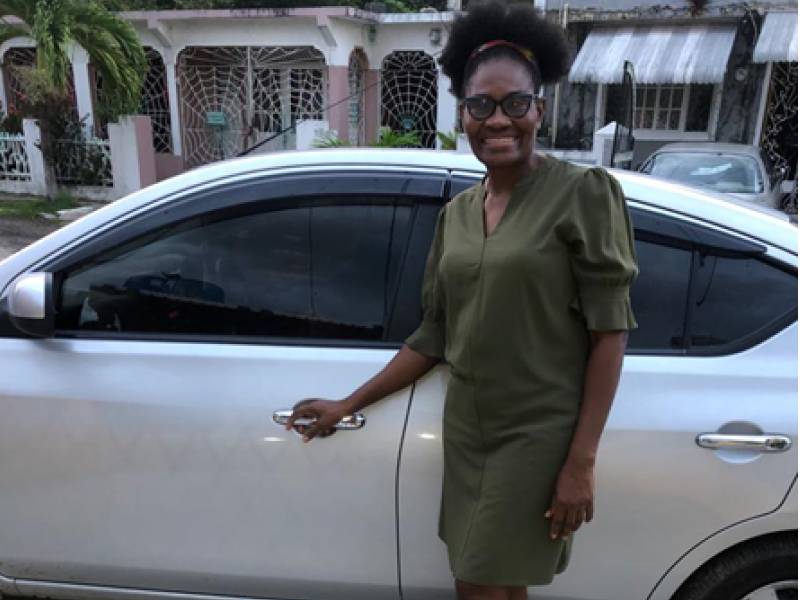 At 55 years old, Sharon Lewin, an early childhood teacher and dressmaker of Spanish Town, St Catherine, basks in the achievement of a goal she has had since early adulthood- to start driving.

Since last November, she has been driving daily and has been enjoying the independence of getting around.

“I always wanted to drive. I used to walk everywhere I go, but now that I’m driving, getting things done is so much more convenient,” she related.

Mrs Lewin started the quest to become a driver 29 years ago when she obtained her driver’s licence while in her 20s. However, several turns of events delayed her accomplishing her dream of driving.

“From I got my licence I have been using it only as an ID,” she said with a chuckle. “Only once I ever drove back then, and it was my friend who insisted that I drive her car,” she pointed out.

For several years, Mrs Lewin saved ardently to purchase a motor vehicle.  After she reached her saving goal, a few of her friends took her around regularly in search of a vehicle.

“I just couldn’t find one that I like. They suggested that I take a loan so I could better afford a vehicle, but I wanted to buy it cash because I don’t like to owe,” she said.

Sometime later, having saved additional money, she pursued her dream again, this time with the intention of buying a mini bus which she had decided to purchase to be used in a business venture.  However, when her brother, who should have operated it, got another job, she did not proceed with the purchase.

“I didn’t have any confidence in anybody else to do it so I just didn’t bother,” she explained.

She further reasoned that if she had purchased the vehicle at the time, she wouldn’t have had any money left to maintain it in the initial ownership phase.  Besides, she had become a mother of three and her husband passed away a year after her last child was born, which placed more financial obligations on her.

“Every time something came up and I had to use the money,” she pointed out.

Last year, her eldest daughter purchased a car for herself and went abroad soon after for a few months. One Sunday when Mrs Lewin needed an urgent item from the supermarket and couldn’t get a ride, she decided to drive the car.

“I wasn’t nervous or scared to drive.  My only problem was parking.  I went to the furthest end of the car park,” she said.

Thereafter, she pursued a refresher driving lesson with an instructor and has since been driving to work.

She pointed out that her daughter will soon resume driving when she begins her new job and, therefore, she is hoping that she will be able to own a vehicle in the near future.

“I don’t have any money to buy a car now but I trust God.”

Mrs Lewin maintains that no one should ever abandon a dream to drive because they are facing challenges or they are getting up in age.

“Always follow your dream. All things are possible with God.  Always have hope that something can happen and things can change in your life as long as you press forward.”

Dael Whylie, manager of the Driving Academy at the Jamaica Automobile Association (JAA), noted that often persons who have had their licence for years and have not driven come to the Academy for refresher driving lessons.

“Usually this happens when there is a change in one’s situation such as the death of a spouse who used to do all the driving or when a usual transportation arrangement is no longer available.”

Ms Whylie suggests that persons, regardless of their age, who are beginning to drive, should participate in the JAA Driving Academy Advance Driver Training programme, which facilitates the use of a driver simulator that can enhance their driving skills.

“The simulator is a computer-operated device that creates an augmented three-dimensional driving experience which is designed to replicate varied road and traffic conditions.”

“Simulation driver training is scientifically proven to substitute for the physical driving environment and without a doubt will help new and experienced drivers to develop better driving skills in a safe environment,” she explained.